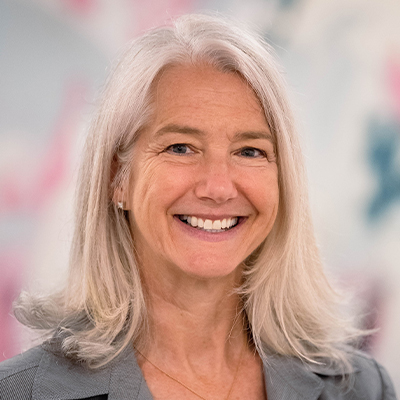 Joining the Severn Leadership Group (SLG) as an SLG Certified Mentor in 2015 and serving on the Board of Directors from 2017-2019, Julie was then selected to become the President of SLG.

Julie Campbell serves as the President and CEO, Severn Leadership Group (SLG), Inc. Prior to joining SLG, she served in several leadership positions at Booz Allen Hamilton and at ARINC Incorporated, a Collins Aerospace company, most recently as the Associate Director of Enterprise Sourcing where she led a global team providing sourcing, procurement, and contract management of IT hardware, software, and services. Prior to industry, Julie served over 20 years in the United States Navy, in the areas of information technology, space systems, and acquisition. She managed the lifecycle of IT programs ranging from $2M – $2B. Previous positions included: Navy Space Cadre Advisor, responsible for 1300+ Navy personnel working in space-related positions; Commander of the First Presidential Communications Command and Emergency Communicator for the President of the United States at the White House Communications Agency; and Senior Advisor to the Director of Signals Intelligence, at the National Reconnaissance Office. Julie has a passion for mentoring others. She has been a senior fellow with the Severn Leadership Group since 2013. She has participated in Fellowship of Christian Athletes and Young Life as a small group facilitator. Julie received a Bachelor of Science degree in Aerospace Engineering from the U.S. Naval Academy, a Masters of Science degree in Space Systems Engineering from the Naval Postgraduate School and Masters Degrees in National Security and Strategic Studies from the Marine Corps Command and Staff College and the School of Advanced Warfighting. Julie is married to Chris Campbell, who serves as the Associate Head Coach for Track and Field at the US Naval Academy. They have two sons, Mark and Luke.